Putin, Gone with the Wind, and Context.

In a 2013 interview, Putin does not pay attention to context (nor his source) when it comes to the statements in the movie "Gone with the Wind" and trying to show it as an example of American individualism.

Interviewer: Do you think we have fundamental ideological differences that prevent us from reaching an understanding on the international arena?


Putin: Alright, currently we have no ideological differences. But we do have fundamental “culture-logical” differences. The foundation of American consciousness is the idea of the ‘individual.’ The foundation of the Russian consciousness is the idea of the ‘collective.’ There is one Pushkin scholar, who noted this concept well; in “Gone with the Wind”, the main heroine [Scarlett], she says “I’ll never be hungry again.” For her, this is of outmost importance. But in our understanding – as a Russian person, we have a different mission, it is something that stretches beyond the horizon [deeper]. It is something spiritual, it is something to do with the Maker. These are two different philosophies of life. This is why it’s difficult for us to understand one another, but it is possible.


Well, Putin (and his source) are partly right. Scarlet in the movie does say, twice actually, that "I'll never be hungry again." However, in context, she also states, right after the first never go hungry statement, "No, nor any of my folk." So she was not just thinking of herself, but her relatives as well. Thus, this is not a case of pure individualism as Putin makes it out to be. Plus, though Scarlet did initiate much autonomy throughout the movie, she does work along side others to accomplish goals (maybe not always making the most moral decisions) of making ends meet, helped her sister-in-law escape Atlanta (who just had a baby), etc. 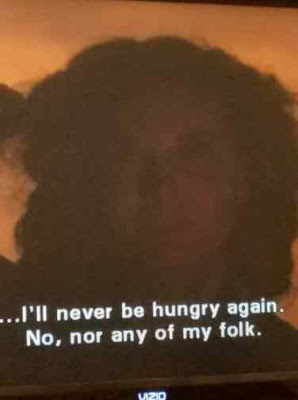 Putin also sends the impression that Russian ideology concentrates on the "Maker" [God], where as this Gone with the Wind example of Scarlet, does not. However, Scarlet does mention God saying, "As God is my witness, they're not going to lick me." 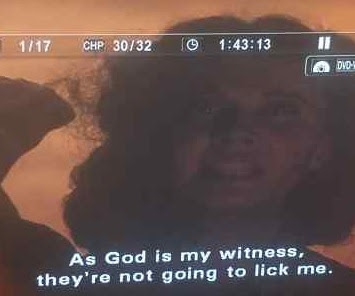 All in all, Putin should have watched the movie himself (with Russian subtitles or have one of his translators translate) so he could have understood more the context of this particular portion of the movie. He is probably ignorant of these statements of Scarlet and was led partially astray by a Russian scholar. Of course, American individualism is rampant in the American psyche. However, Scarlet is not a solid example of this.

Posted by Jonathan Hanna at 9:42 AM