David Farnell New Attacks on the Bible Veritas Defending Inerrancy Scholarly MishapsIronically, there are errors, intentional or unintentional, made by evangelical scholars about other evangelical scholars in their latest presentations on biblical inerrancy.  Mishaps will happen, but these are beyond grammatical slip ups on Powerpoint slides and verbal mispronunciations of long tongue twisting Bible names. Moreover, there are blogs/websites that, frankly, are disturbing that leave negative impressions for believer and non-believer alike (that hopefully they did not intend to make).


For example, in early Nov. 2014, NT professor David Farnell, of Master’s Seminary, recently gave a lecture called “Responding to the New Attacks on Scripture” at a apologetics conference located at Veritas Seminary.[3] In his presentation, he was analyzing some current trends within evangelical scholarship that hinder the 1978 Chicago Statement of Biblical Inerrancy statement.[4] Some of his presentation was of value, but some was not. I will post examples of both. (whole lecture here)

First, he critiqued NT historian Mike Licona’s position on the rising of the saints passage in Matthew 27:52-53 in the 2010 Intervarsity Press published book The Resurrection of Jesus: The New Historiographical Approach. The passage reads as follows that after Jesus’ death, Matthew records six events/phenomena, two of which were.


The tombs were opened, and many bodies of the saints who had fallen asleep were raised; and coming out of the tombs after His resurrection they entered the holy city and appeared to many. (Mt. 27:52-53 NASB)

Given the presence of phenomenological language used in a symbolic manner in both Jewish and Roman literature related to a major event such as the death of an emperor or the end of a reigning king or even a kingdom, the presence of ambiguity in the relevant text of Ignatius, and that so very little can be known about Thallus’s comment on the darkness…it seems to me that an understanding of the language in Matthew 27:52–53 as ‘special effects’ with eschatological Jewish texts and thought in mind is most plausible.[5]

Licona then points out that there is more corroborative evidence to back up this take on Matthew’s post crucifixion account. He asks that if, “…the tombs opened and the saints being raised upon Jesus’ death was not strange enough, Matthew adds that they did not come out of their tombs until after Jesus’ resurrection. What were they doing between Friday afternoon and early Sunday morning?”[6] (emphasis original) 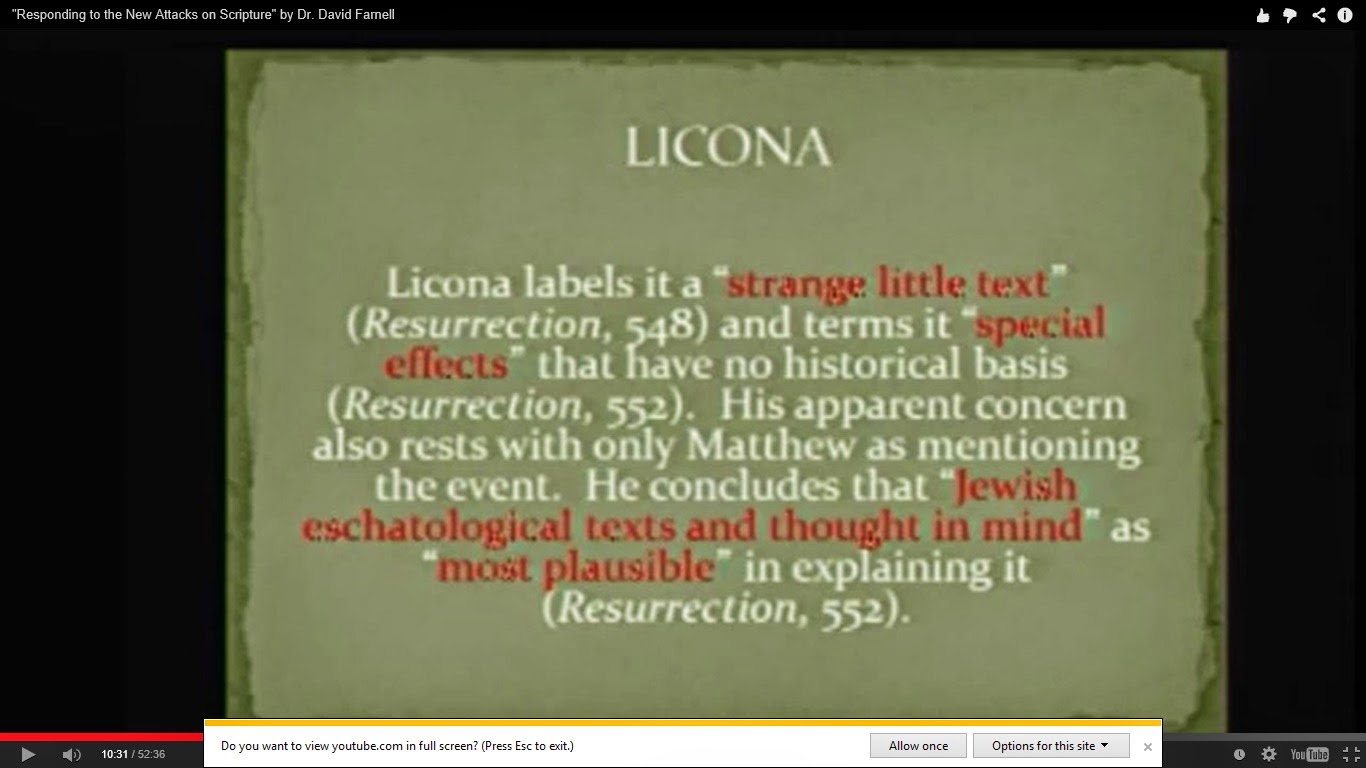 As I watched this, I waited for Licona’s current published position to be presented. More specifically, at the Evangelical Philosophical Society annual meeting in Nov 2011, he presented his latest evaluation of the evidence concerning Matthew 27:51-53. Licona states, “So, for now, I remain undecided pertaining to how Matthew intended for his readers to understand the raised saints.”[7] He also stated this elsewhere, for instance in an interview with bestschools.org in 2012, he again says he remains at the position of, “…uncertainty pertaining to how Matthew intended the saints raised at Jesus’ death to be interpreted.”[8] Others have corroborated that this is Licona’s current stance.[9]
Surprisingly, Farnell did not cover Licona's current position. Why?
Does it not give the audience a false impression of what Licona’s current conclusions are? Should credit not be given when credit is due?


Houston Baptist Seminary Is Affiliated With The  SBC?

A moderate issue, but worth mentioning, is while reviewing Licona, one of Farnell’s Powerpoint slides listed Houston Baptist College (I think he meant “University”) with the letters “SBC” next to it. 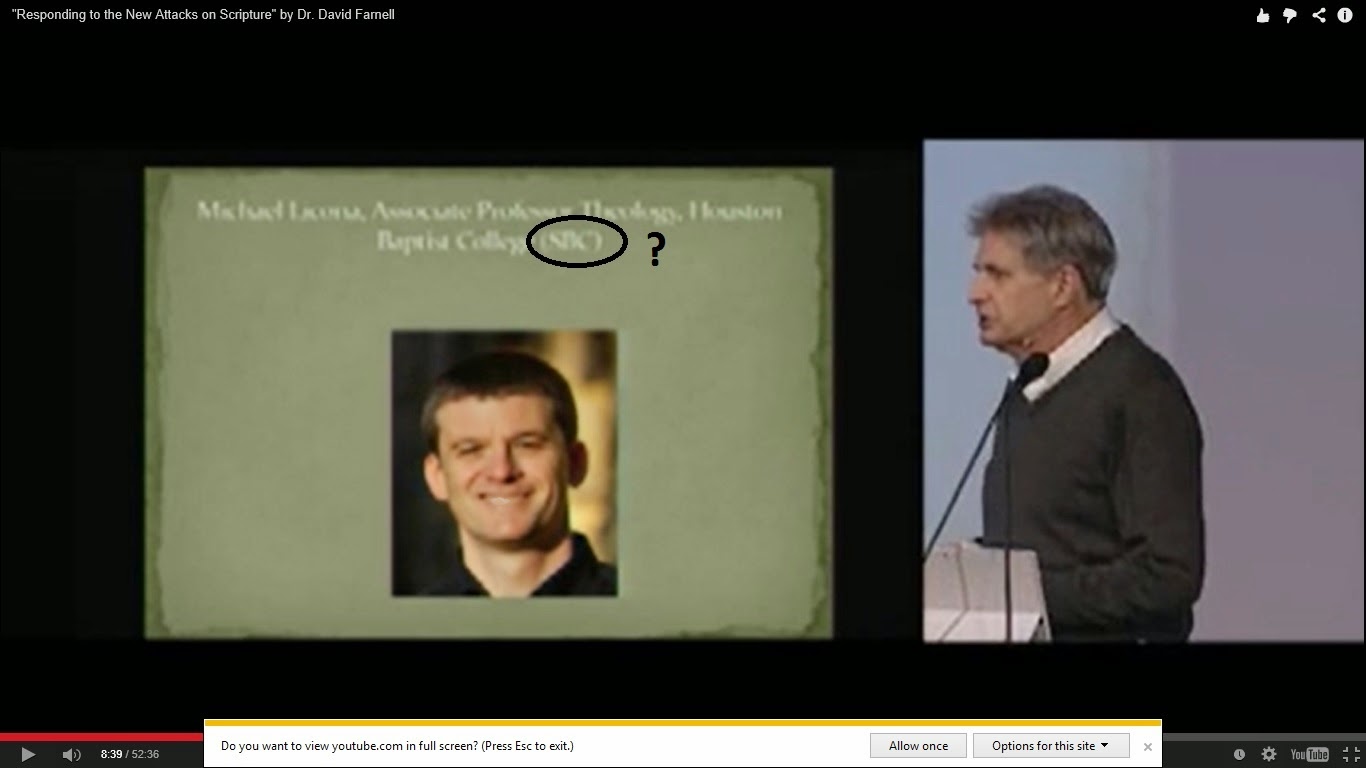 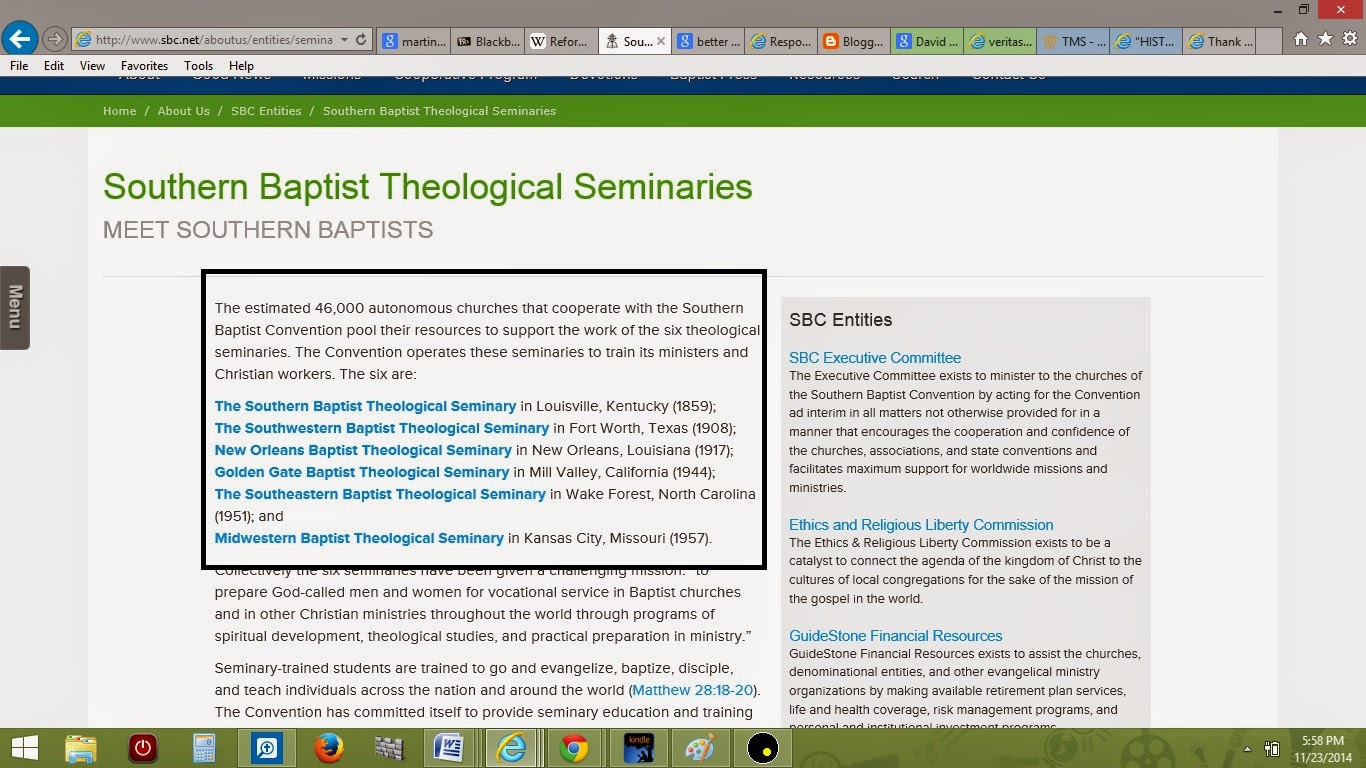 Granted, according to the Baptist Press, the Southern Baptist of Texas Convention claim they have a “ministry relationship” with HBU.[10] Moreover, HBU does have a close relationship with the Baptists General Convention of Texas (two separate conventions established about 15 years ago).  This can be confusing and educational associational boundaries can sometimes seem blurred. Even so, there is no official national SBC affiliation. I think it is fair to conclude, that HBU affiliation is informal and the slide should have reflected that.*

Within this debate, this detail matters.  This is due to recent SBC history on the debates and schisms over biblical inerrancy. (see James Hefley's multi-volume set called The Truth in Crisis). It does not need to be suggested to SBC laymen that history is repeating itself where SBC seminary professors are being accused of formally publishing that, in one way or another, there are errors in Scripture. Again, the slide should have reflected that and it would be beneficial if it was corrected for possible future presentations.
Does William Lane Craig Deny The Guard At The Tomb? 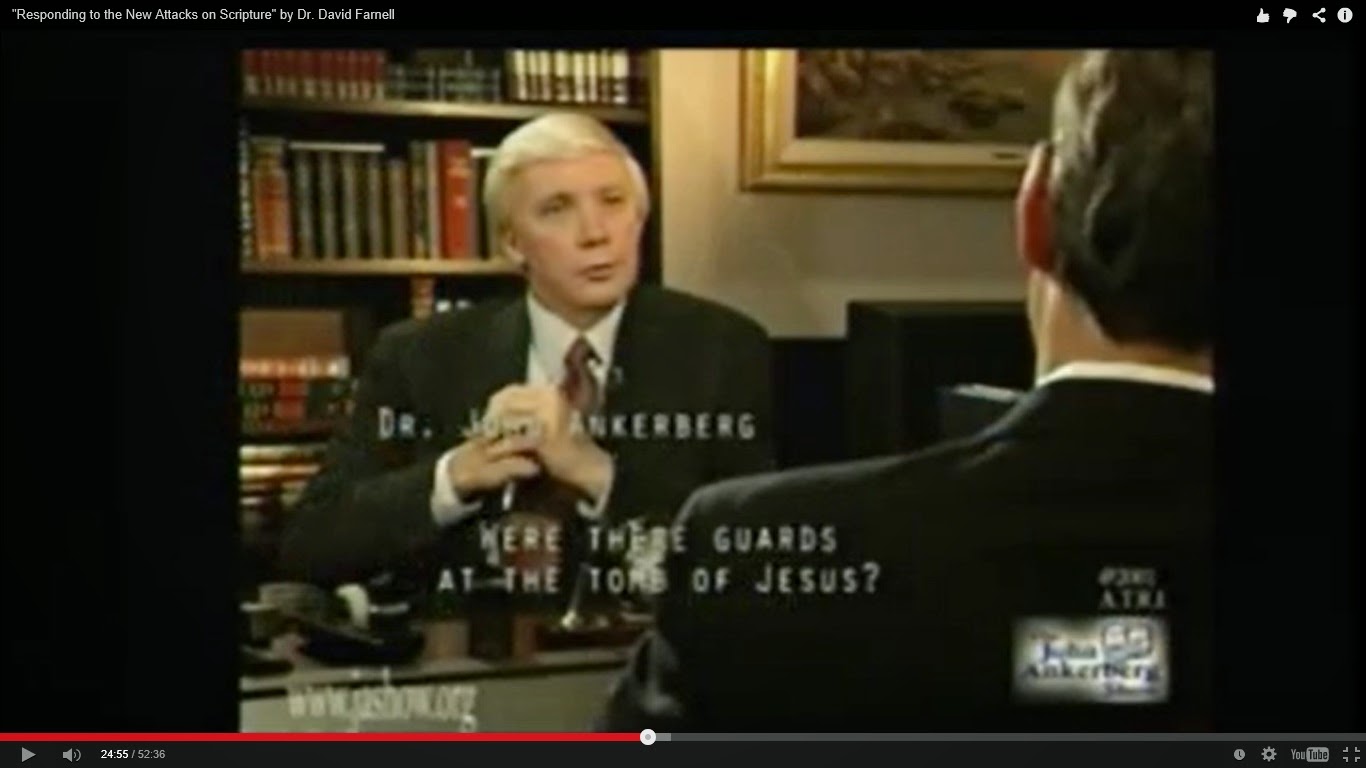 Farnell presents several videos featuring philosopher and theologian William Lane Craig. During a interview on the John Ankerberg show, Craig says some statements about the historicity about the guard at the tomb that leaves one wondering what does he really believe (Matthew 28:4,11). Farnell admits that he hopes that he is misunderstanding Craig’s proposal that the guard at the tomb is a questionable event that actually happened in history. More information from Craig would be beneficial. On another note, for some reason, on the John Ankerberg website, it is not accessible. Check it out here

This is a post Farnell has on a website/blog.  What does this mean and how does it help convince supposed neoevangelicals to be evangelical again? 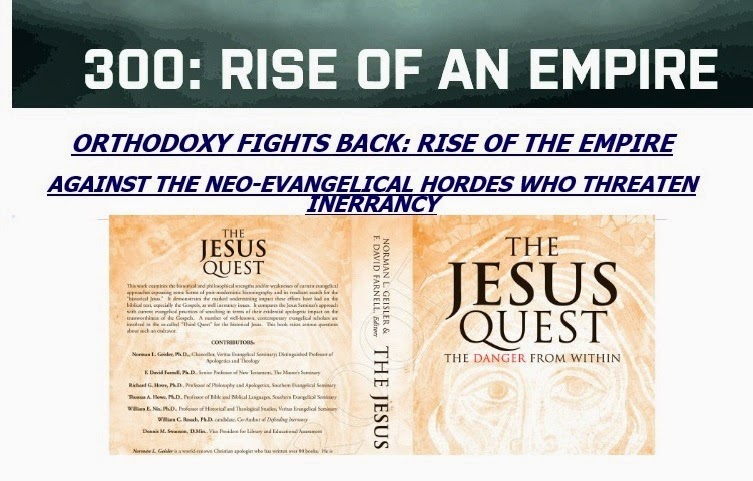 Hopefully, some of these questions will be answered.  If they are, I will update this post. [11]

[1] Inc Merriam-Webster, The Merriam-Webster Dictionary of Quotations (Springfield, MA: Merriam-Webster, 1992), 50.
[2] Tertullian, “The Apology,” in Latin Christianity: Its Founder, Tertullian, ed. Alexander Roberts, James Donaldson, and A. Cleveland Coxe, trans. S. Thelwall, vol. 3, The Ante-Nicene Fathers (Buffalo, NY: Christian Literature Company, 1885), 46; Even though Tertullian can be overly rigid, these words I think apply here for it seems evangelicalism is in need of such blunt statements from the great minds of the past. Harry Boer writes about this rigidness saying, “He saw everything in terms of right or wrong, yes or no, straight or crooked, light or darkness.” Harry R. Boer, A Short History of the Early Church (Grand Rapids: Eerdmans, 1976), 86.
[3] http://defendinginerrancy.com/responding-new-attacks-scripture/
[4] Systematic theologian Wayne Grudem summarizes the history of this statement. He writes that a body of 300 scholars and pastors, “drafted the ‘Chicago Statement on Biblical Inerrancy’ in 1978 that affirmed the inerrancy of Scripture and defined what most evangelicals understand by the term inerrancy”[4] (emphasis original). Wayne A. Grudem, Systematic Theology: An Introduction to Biblical Doctrine (Leicester, England; Grand Rapids, MI: Inter-Varsity Press; Zondervan Pub. House, 2004), 1244.
[5] Michael R. Licona, The Resurrection of Jesus: A New Historiographical Approach (Downers Grove, IL; Nottingham, England: IVP Academic; Apollos, 2010), 552.
[6] Ibid
[7] http://www.risenjesus.com/when-the-saints-go-marching-in-2 page 8, second paragraph. (accessed 11/2014)
[8] http://www.thebestschools.org/blog/2012/05/02/michael-licona-interview/ (accessed 11/2014)
[9] Heath Thomas and Robert Stewart write, “One of the important issues to arise in the discussion is the relationship between biblical interpretation and biblical inerrancy. Dr. Licona takes an
approach to Matt. 27:52-3 that views the raised saints at the time of Jesus’
death as possibly an apocalyptic symbol or something akin to it. At present, it
seems he is undecided about the precise interpretation.” Southeastern Theological Review 3/1 (Summer 2012) Thomas and Stewarts introduction on page 11.
[10] http://www.bpnews.net/39699 (accessed 11/2014)
[11]  I did not personally email Dr. Farnell, about these discrepancies since 1) I will update the post with his explanation. 2) The nature of these probable errors I concluded after some reflection could not wait.

Posted by Jonathan Hanna at 6:39 PM